Listen to the Muse! 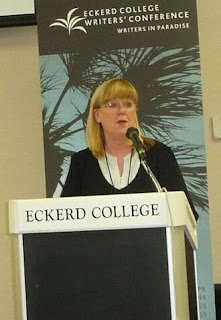 So where have you been, Judi? Good question. Here's my good answer: writing, reading, and sharpening my writing tools. In fact, I've not only sharpened my tools, I picked up a few new ones.

In January, I was lucky enough to be accepted into the Writers in Paradise Conference, hosted by Eckerd College, in St. Petersburg, FL. In fact, they awarded me a scholarship, for which I am most thankful and honored.

WIP is the brainchild of two gifted authors, Sterling Watson (SWEET DREAM BABY) and Dennis Lehane (THE GIVEN DAY, GONE BABY GONE, MYSTIC RIVER). They dragged in other writers to assist them: Richard Russo, Jane Hamilton, Michael Koryta, Les Standiford, John Dusfresne, and a few others. And for eight days, these fine writers worked our asses off.

I met some wonderfully fine writers and expanded my to-be-read pile. But really what I took away of most value was to trust myself. I had applied initially because even though the manuscript for my first novel-length fiction was finished, I was uneasy about the beginning. After a rather massive rewrite (using those new tools and the resharpened ones), I now know my baby is ready to come out of the bath water, get towel-dried, dressed, and its butt patted as she goes out the door.

So stay tuned!
Posted by Judi Rohrig at 9:37 AM