A week or so ago, I posted that All-American Horror was set to be released. And while both Barnes & Noble and Amazon list the date as October 31, 2012, it is possible there may be a slight delay. But it is coming, and editor Mort Castle has finally ripped the sheet off, unveiling the TOC (Table of Contents). 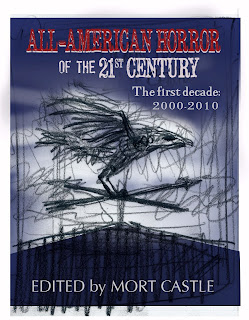 
1. The Station by Bentley Little
2. Sonny Wilson’s Last Show and Tell by Jeff Jacobson
3. Under The Skin by Nicholas Kaufmann
4. Mr. Handlebars by Mark Powers
5. The Pumpkin Man by John Everson
6. Wasted On The Young by Cody Goodfellow
7. Big Rock Candy Mountain by Weston Ochse
8. Driving The Last Spike by Brian Hodge
9. The Albright Sextuplets by Norman Prentiss
10. How Sweet It Was by Thomas F. Monteleone
11. Steagal’s Barber Shoppe and Smoke Emporium by Jay Bonansinga
12. Still Crazy After All These Years by Judi Rohrig
13. Night Dive by F. Paul Wilson
14. High Moon by Wayne Allen Sallee
15. Honor System by Jack Ketchum
16. The Secrets of the Living by Sarah Langan
17. Live Forever! by Sam Weller
18. The Bees by Dan Chaon
19. Rhymes With Jew by Paul G. Tremblay
20. Tracks Of a Hellhound by Tina L. Jens
21. Provenance by Andy Duncan
22. Recess by Darren O. Godfrey
23. A Circle of Friends by R. B. Payne
24. Turbulence by Kristine Kathryn Rusch
25. The Tree Mumblers by Pete Mesling
26. The Dude Who Collected Lovecraft by Tim Pratt and Nick Mamatas
27. Smoke In A Bottle by Steve Rasnic Tem
28. The Engine Of Desire by Livia Llewellyn
29. Moths In Damp Grass by Tracy Knight
30. They by David Morrell

I hope you took note of #12. Honored, I am. Honored and thrilled and delighted.

How nice of you to stop by. Hope you're well and you are still writing. Maybe we can connect on Facebook.