I'm not really one of those people who make resolutions when a new year begins, but I think dusting away the cobwebs of the past year or two -- or even five -- is a good discipline. Especially now. You see, I've become a "woman of a certain age." That means my future no doubt involves a shorter distance ahead from the one I've already traveled. Or at least I hope so. As much as I enjoy doing my first sit-up just following waking in the morning, I don't want to ever be some pea-drooling, aging Jabba the Hutt occupying a corner in one of my daughters' homes. We're all born to die, but just as for me it's always been more about the journey than the destination, I'm more interested in forging ahead to the next sentence/paragraph/chapter in my life's book.

See? It always comes around to that, doesn't it? Reading!

I was born to read. Actually, my mother (God rest her soul) would correct me if she read this. She used to tell me I was born to tell stories. Hence, the large easel set up for me in our kitchen in the little cottage where we lived then on my grandparents' land. I would "tell" her my dreams in slashes of green and red and blue, splashed on paper after paper with my fingers humming, busy as buzzing bees.

Then it was onto hiding under my parents' bed during the day and reading my brother's comics. Superman galore, only I had this thing for Aquaman and his long blonde locks and rock hard muscles.

Later, my family moved to a small river town in Indiana where the local library was never more than a few blocks away, no matter which house we lived in (and we played musical chairs with the rentals). The library was my not just my world. It was the W H O L E  W I D E  W O R L D!

I read. I write. I can't really explain why I am driven to do either, except to say: I can't not.

To my way of thinking, we all have six senses: see, hear, touch, smell, taste, and imagine.

A couple of years ago I discovered I had read far too few women authors, so I went about to deliberately correct that. Last year, I decided to read whatever I wanted rather than those works I should. (Since I do editing jobs on the side, and I am an easy touch to read works by young writers, I do tend to read for other than "pleasure.")

In 2013, I read 54 books. I admit I did not finish them all, but I did give each book I began an honest chance by not pitching it across the room or vomiting on it until after the first hundred pages.

I began the year inside Elizabeth Chadwick's To Defy a King and padded out with Tony Earley's short story collection Here We Are in Paradise. 'Twas a grand beginning and an amazing end. In between I savored quite a few works by authors I had never even knew of, and that's exciting! I also reread a few friends. Here are my highlights from 2013 (not in order of preference):

1. A Land More Kind Than Home by Wiley Cash
2. The Signature of All Things by Elizabeth Gilbert
3. Benjamin Franklin's Bastard by Sally Cabot
4. Z by Therese Anne Fowler
5. Cinnamon and Gunpowder by Eli Brown
6. Jim the Boy by Tony Earley (also The Blue Star)
7. The Boleyn King by Laura Andersen (also The Boleyn Deceit)
8. The Silver Star by Jeannette Walls
9. The Color Master by Aimee Bender
10. Love Water Memory by Jennie Shortridge
11. No Regrets Coyote by John Dufresne
12. Restoration by Rose Tremain (also Merivel and Music and Silence)
13. One Day by David Nichols (also A Question of Attraction)
14. Mrs. Poe by Lynn Cullen
15. Shadow of the Alchemist by Jeri Westerson (in fact ALL the Crispin Guest novels!)
16. The Maid's Version by Daniel Woodrell
17. The Nell Sweeney Mysteries (6 books) by P.B. Ryan (this was my third time reading this series!)
18. The Widow's War, Bound, and  The Rebellion of Jane Clarke (3 books) by Sally Gunning
19. The Queen's Man by Sharon Kay Penman (in fact all four in the Justin de Quincy series!)
20. Run Wild and After Sundown by Shelly Thacker

While I await the January 28, 2014 release of Wiley Cash's This Dark Road to Mercy, I am reading both Heretics and Heroes by Thomas Cahill and Decameron by Giovanni Boccaccio.

Perhaps this is the year of nonfiction and classic fiction. Who knows? That's the exciting part.

As for my writing . . .  Ultan's Library has just posted an interview with me concerning my story, "Tunes From Limbo, But I Digress," at their site. It was published in Shadows of the New Sun, a Gene Wolfe tribute anthology. 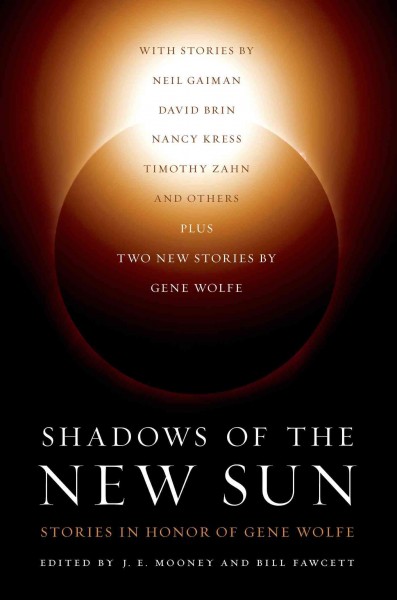