SHADOWS ON THE SHADOWS

There are some days you anticipate more than others: the first date, graduation, weddings, births, visits. And some come happily, but with a shadow attached.

Yet let's allow the good news to stretch its arms wide and own this moment of bliss. A book has been published! Its words now live,ready and anxious to be coddled and stroked and savored by some welcoming reader. 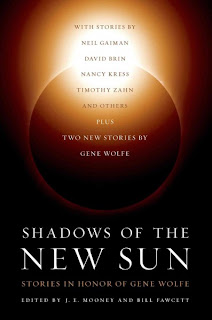 Today marks the release of Shadows of the New Sun, an anthology that honors Master Storyteller Gene Wolfe. While Wolfe himself has two stories inside the pages, sixteen other authors offer tributes in the form of dancing and marching and even floating through many of the worlds created by Gene in his numerous books.

My story, "Tunes from Limbo, But I Digress" began with just the title. It came into my head several years ago, but, despite several attempts, I was never able to toss it out on the mat and tease out the story it deserved.

I didn't know it was waiting in the shadows for this very anthology.

But which Wolfe world?

My favorite Wolfe book, I've found, generally seems to be whatever I'm currently reading. (And no true Wolfe reader ever reads one just once or something might get missed or misunderstood or run and tuck itself in your pocket.) But while I hadn't just finished Home Fires, it was the very story that tugged at my title.

And the shadows moved as they often do when clouds smudge the moonlight through leafy trees.

And so the shadows began to spin and weave. A dash of names. Quick, catch them! Threeve.

Threeve: a number between three and five, but not four. But four, yes. Halves and wholes.


And the Man in the Moon, sighed The Raggedy Man,
Gits!
So!
Sullonesome, you know,
Up there by hisse’f sence creation began!