I Brake for Coffee!

I used to be a newspaper columnist, penning something called "Coffee Break." Appearing in the Lifestyle or Family section of the Evansville (IN) Courier (now the Courier & Press), the column covered daily life in our river city. That meant I wrote about my family: husband (a reporter for the same newspaper) and our two daughters who I tagged Teen Sweetie and Bugs. Luckily my husband and I had spaced our pair almost ten years apart which allowed me to cover two age groups in one fell swoop.

In considering what I should do with my blog these days and stumbling across the stack of old columns and currently dealing with my empty nest, I've decided to share a few of what became "favorites" here. Maybe we'll all learn something from the past together. 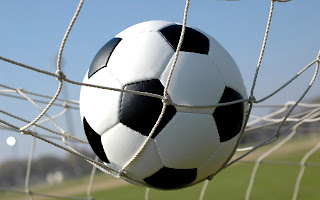 One of the blessings of having children is that they let you relive your own childhood.

I grew up in a family with two girls, and I was the oldest of the two. Maybe that's why I tend to be more understanding about the elder daughter, and why I let her torture her sister. Oh, it's not physical pummelings or anything like that, just . . .

"So what position are playing in soccer?" Teen Sweetie asked her eight-year-old sister, Bugs.

"I don't know. We're just practicing so far," Bugs said. "What positions are there?"

"Well, you could be a goalie. Nah, porbably you're too little for that."

Bugs stamped her foot. "I'm not too little!"

"No, I mean you're too short," Teen Sweetie said. "It's just for your team, I figured they'd make you high goalie."

"-- third or fourth graders, I mean, they have to have two goalies."

"Sure. And you'd be perfect for high goalie."

"But you have to be able to hang up there that long, that's the only thing."

The little one's smile drooped. "What do you mean?"

"Well, the high goalie hangs from the goal post and stops any balls from entering up there."

There was a long moment as Bugs thought about this one. "You mean I'd have to hang upside down?"

Teen Sweetie nodded, but kept an incredibly straight face. It made me proud and scared at the same time.

"But the ball will hit me."

"Well, sure, but you always get hit with balls in soccer."

"Mom," I heard the whiny tone. Yep, Bugs repeated everything her sister had just told her, ending with the familiar and dreaded words: "Is that the truth, Mom?"

"I never played soccer when I was a kid, but your sister did. I guess she knows." I told her, using my very best straight face. (I wonder if the older one ever questions where she gets that look from.)

Bugs played her first soccer game the other night. Her team won 5-1.

She played well, and she didn't even have to hang upside down once. But she surely did stay as far midfield as she could get, and I did see her eye the goalie a couple of times.

Later, the two of them will laugh about this. Just ask my sister.

Just don't ask her about warding off mice by putting peanut butter on your your toes.