Basking on the Beach #5: Gene Wolfe

I am here today to tell you about Science Fiction and Fantasy writer Gene Wolfe and to bring you his list of books to read as you bask on the beach, so listen up.

Okay, Gene Wolfe is one of the most celebrated writers of our time.

But Gene Wolfe's stories are not easy-reads. They are challenging. Demanding. Neil Gaiman has described him as "...the most dangerous writer alive today." And he is. Actually, I would aptly describe Gene Wolfe as a throat-grabbing-swashbuckler. From Word One, his wolf's paw very gently snags your collar, and you think with that kindly grin peeking out from under his bushy mustache that he's only going to pop you under the chin and chuckle "Gotcha!" And you, dear reader, will only begin to gasp for air once you're about a third of the way into his story. Then again, you may find breathing annoying if it interrupts your reading.

When I finished reading Wolfe's Pirate Freedom, I flopped the pages back and began reading it again at once. I had to. The same with Homes Fires. Because once he has you by the throat, you don't want him to let you go. You are part of whatever world he has created. Why leave? 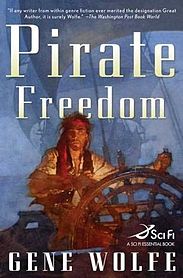 But that's what pirates do: Purloin your treasure and leave you grateful they spared your life. (So you can read more!) The Land Across is Wolfe's expected next novel, and 2013 will see a tribute anthology, Shadows of the New Sun, edited by Jean Rabe, coming from Tor.

But here's Wolfe's own recommendations for Basking on the Beach (along with his comments):

1. The New Testament
You can't really understand a great many books until you read this one.

3. The Remembrance of Things Past, by Marcel Proust
Everybody ought to read at least one truly great novel. There are two translations -- one by Scott Moncrieff, the other by Moncrieff and Terence Kilmartin -- both are good.

4. The Annotated Alice in Wonderland, by Louis Carroll, annotated by Martin Gardner. 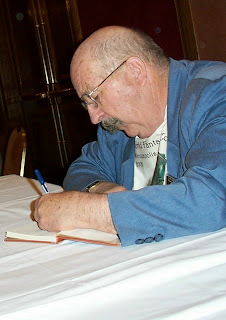