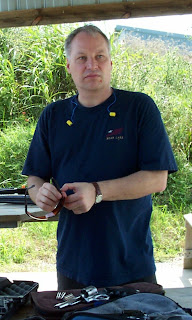 Joe R. Lansdale is one dangerous writer. If you don't buy his books, he'll find you and beat the tar out of you. And, yes, he can do that because he's well-versed in various methods of tar-beating. Not only does he have his own martial arts school, he developed his own discipline.

Or he'll shoot you. He can do that, too. (Above he is on a shooting range somewhere outside Tulsa, OK. Look closely and you'll see the spatter of blood on his chin from a nasty little derringer that nicked his hand.) But don't worry, he won't fire until after he's totally disarmed you with his incredible storytelling abilities, either verbal or within the written word.

He's won a ton of awards for his writing (Edgar, Bram Stoker, British Fantasy), but he's never been one to be satisfied with keeping his writing habits to himself. Along with his Texas yellow rose -- his wife Karen -- Joe worked to create the Horror Writers Association (along with Dean Koontz, Robert McCammon, Mort Castle, and some others) and was recognized for his efforts earlier this year when the HWA honored him with its Lifetime Achievement Award (and Karen with the Richard Laymon/President's Award for her help).

His latest book is Edge of Dark Water wherein Joe employs his Texas Twain tongue, telling the story of East Texas teens setting off to Hollywood with the ashes of one of their friends. A murdered friend.

Frankly, nobody handles tension and feisty females like Joe. But this is only one of the many ways he writes. I'm a big fan of his Hap Collins and Leonard Pine mystery adventures as well as his bizarre short stories. And his westerns. Period pieces. Oh, heck, my rule of thumb with Joe's books is simply to pick them up and read them. I've never seen him miss.

And what are the books Joe recommends as you head to the beach this summer? Let's see:

1. To Kill A Mockingbird by Harper Lee

5. I Am Legend by Richard Matheson 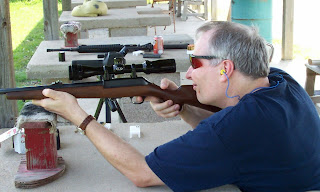