There was a man who lived a life of fire.
Even upon a fabric of time,
Where purple becomes orange
and orange purple,
This life glowed,
A dire red stain, indelible,
Yet when he was dead,
He saw that he had not lived.

Independence Day. A time set aside to celebrate our freedom and the struggles men (and women) make to earn that freedom. What better way than diving inside a book? And, yes, I have suggestions. 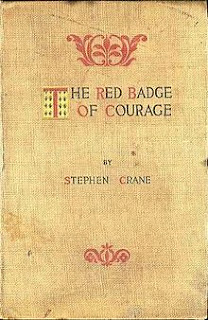 I was introduced to Stephen Crane in high school. No, he didn't ask me to the prom, but we dated. Well, since he died exactly forty-nine years (to the day) before I was born, it proved a curious relationship. It began with Maggie: A Girl of the Streets and spred to his other stories and poems. Crane's style was easy and familiar. His most famous work, The Red Badge of Courage, was one of those stories that snagged me fully and didn't let go until Henry Fleming "had rid himself of the red sickness of battle."

But Crane's The Open Boat had plunked my tush on the vast ocean and somehow I fell in love with the sea. What a convenience when the next required book just happened to be Joseph Conrad's Lord Jim. 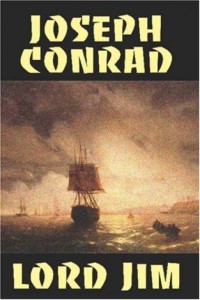 Jim, along with the other crew members, abandons the sinking Patna, only to find the ship doesn't sink. But it's Jim who faces the music, standing trial and being sentenced to be land-bound. But he does it with grace and bravery. Jim, like Fleming, bears his own personal trials, only this time instead of a red badge, we find Jim in white. And the meaning? Well, I want you to read the story yourself to find out.

Which brings me to one of my favorite books of all: Billy Budd: Foretopman by Herman Melville. 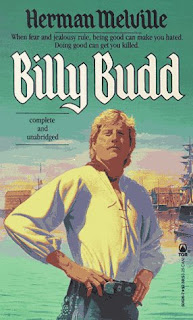 I used to faithfully read this book every summer. Billy Budd. Innocent, pure Billy Budd comes up and against a true baddie in literature, Master-at-Arms John Claggert. Melville unstoppered the barrel and let the brew flow. Of course Moby-Dick had been Melville's most noted novel, but I believe Billy Budd, like The Red Badge of Courage and Lord Jim, offers out the striving of true courage which is what we Americans are celebrating on this Independence Day. And to never give up, despite the ultimate cost. Lives unwasted.

But I think Crane might have gotten it wrong in his poem. In the end the man does live. Every time one of us opens his book.