"He hung around quite a while, entertained the folk, and was stopped quick and clean when the right time came." John D. MacDonald's proposed own epitaph 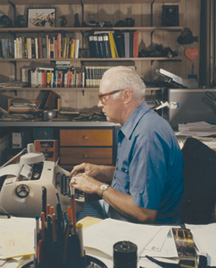 I imagine a lot of us play the three-degree game in some form or another. Personally, I'm not interested in discovering how far apart I am from Kevin Bacon. It's only been in the past couple of years that I stumbled onto just how close I have come to my very favorite author, John D. MacDonald.

Sadly, too many younger writers may not have read John D.'s twenty-one book Travis McGee series or what I lovingly call his "little books," those awesome Gold Medal paperbacks with the titillating covers, or any of his later and fatter books. And I may have missed them as well if it hadn't been for writer Dean Koontz. 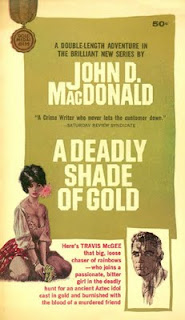 Which brings me to my other favorite game: How did I get here from there?

While researching a story I was working on, I found a fictional book through my local library that included my subject. Curious as to how one Dean Koontz handled it, I checked out the book.

Of course,  B I N G O! I fell madly in love with Koontz's writings which means I also had to read Katherine Ramsland's Dean Koontz: A Writer's Biography which led me to The Dean Koontz Companion, edited by Ed Gorman. And Koontz said this about one John D. MacDonald:

"He was a brilliant writer. The McGee series is terrific, but about forty of the earlier books are so stunning, they eclipse the McGee series. When I read something like Slam the Big Door, Cry Hard, Cry Fast, The Damned, or The End of the Night, I usually turn the last page, thinking, "Okay, Koontz, you don't belong in the same craft as this man; go learn plumbing, Koontz, get yourself an honest trade."


Okay, you guessed it. I had to read this MacDonald guy, and where better to begin than at the beginning. Well, almost the beginning. I started with The Deep Blue Goodbye, the first book in the Travis McGee series. I have now read all the Trav books at least three times, but not just for entertainment. There's a lot to be learned about writing from John D.

He was a Storyteller with a big "S," capturing the period he wrote in with honesty and without apology. He's still being criticized for his treatment of women, but really he reflected the times, but I found him to be so totally taken with the fairer sex. He bravely took on the challenge of allowing his main character, Trav, to be be utterly unleashed in The Green Ripper, only to be honored with the National Book Award the following year for his effort.

Stephen King has argued that John D.'s The End of the Night "is one of the greatest novels of the 20th Century." I say it's the story Truman Capote yearned to tell.

Which brings me back to my original degrees' game. Joe Hensley, who wrote a number of novels and short stories including the Robak novels, served in his day-job as an attorney and judge in Jefferson County, Indiana. A Democrat, Joe also wore the cap as the Chairman of the Madison, IN, city campaign many moons ago. And under that same moon, I served as the city campaign treasurer. I knew Joe well. What I didn't know was that he and his wife knew John and Dorothy MacDonald well enough to take cruises together. Heck, I didn't even know was a writer then, and he had already penned two short stories with Harlan Ellison.

But thank you, Dean Koontz, for turning me onto John D. MacDonald. But, oh, my, what that's led to: Discovering the real Florida (including that sugar-sand beach at Siesta Key); the George Smathers Library at the University of Florida in Gainesville; a wealth of stories I have not yet plumbed; fellow JDM-lovers; and my own word-wrestling.

[Cal Branche has a wonderful site dedicated to John D., why not take a peek.]