“That is all there is to the story. Catherine died and you will die and I will die and that is all I can promise you.” One of Ernest Hemingway's endings to A Farewell to Arms. 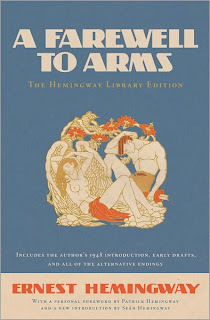 According to a nytimes.com story, a new edition of Hemingway's A Farewell to Arms has been released which includes a variety of endings he grappled with. The proposed parting shots, along with early drafts of other passages, have been dug out of the Ernest Hemingway Collection, housed at the John F. Kennedy Library in Boston, MA.

Since Hemingway wrote pre-computer, he has left an amazing paper-trail of his creative process, and this volume should offer quite an interesting look inside his genius. (And make a lot of other writers feel better about their own revisions.)

Also included will be the other titles Hemingway considered using. Love in War? Nope. He even crossed out The Enchantment. (Thank God!)

Personally, I can't wait to read this. A Farewell to Arms was my very favorite Hemingway book when I was younger.

I'm certain I wrote that in the diary I kept back then. Wonder where I put it?
Posted by Judi Rohrig at 4:19 PM