Basking on the Beach #1 with Alafair Burke

A long time ago in a galaxy far, far away... Well, it seems like a long time ago since I edited and published a weekly electronic and print newsletter called Hellnotes. I won't go into its long and notable history except to mention that under the reign of David B. Silva and Paul Olson, it won an International Horror Guild Award and during my stint it was honored with the Bram Stoker Award.

One of the summer segments I loved was called "Hell on the Beach" where a few horror and mystery writers offered suggestions for which books to drag along while on vacation.

This time, in honor of the global-warming summer we've been experiencing, I've asked a few writers (because who reads more than writers?) to toss out their suggestions while "Basking on the Beach!"


First up is crime novelist Alafair Burke. By day a professor of law and a former deputy DA herself, Burke has created two main series protagonists including Oregon Deputy DA Samantha Kinkaid and NYPD detective Ellie Hatcher. Her latest book, Never Tell, is the fourth book in the Hatcher series.

1. Dare Me by Megan Abbott
"Dare Me is going to earn Megan the recognition she deserves. It's the story of two cheerleaders and a new coach who disrupts the accepted pack order."

2. Heartbroken by Lisa Unger
"Lisa Unger and I met about four years ago. She was such a cheerful, happy person, I wondered what kind of crime fiction she would be writing. Turns out she's carrying around some pretty dark thoughts... This might be my favorite. She builds tremendous suspense in telling the four generations of a family drawn over and over again to an island."

4. Precious Blood by Jonathan Hayes
"Hayes has an amazing gift for writing beautifully about violence. As a senior medical pathologist in Manhattan, he writes with utter confidence and authority."

5. The Drop by Michael Connelly
"If anyone who likes procedurals isn't reading the Harry Bosch series, it's time to dig in! I love the way The Drop features two cases that pull at different parts of Bosch's personality. What a great character!" 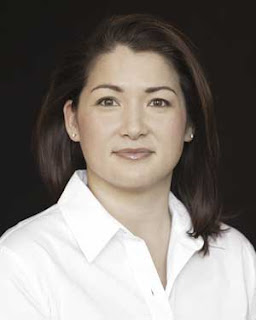 Thanks so much, Alafair, and by the way, 212, Hatcher novel #3, is currently available for the BN Nook e-reader for a mere 99 cents!
Posted by Judi Rohrig at 1:33 PM