"There are worse crimes than burning books. One of them is not reading them." Ray Bradbury 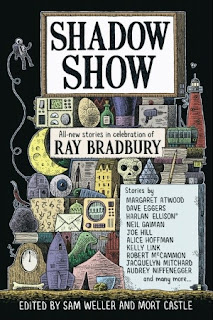 I don't remember the first story I read by Ray Bradbury, but I do remember he was the first writer to grab me by the neck and yank me into one of his worlds. It was as though he'd taken this huge bottle opener and uncorked my senses.

From Dandelion Wine: "Dad stood comfortably saying this and that, the words words easy in his mouth. He made it easier by laughing at his own declarations just so often. He liked to listen to the silence, he said, if silence could be listened to, for, he went on, in that silence you could hear wildflower pollen sifting down the bee-fried air, by God, the bee-fried air! Listen! the waterfall of birdsong beyond the trees!"

Though on June 6, 2012, a terrible silence fell when Bradbury died, we can still hear that "bee-fried air" and "waterfall of birdsong." All we have to do is pick up one of his books and immerse ourselves in his stories.

And be inspired by his generous gifts.

These fine writers contributed stories to Shadow Show, a tribute anthology, edited by Sam Weller and Mort Castle. Set to be released on July 10, Shadow Show also includes an introduction written by Bradbury.

And to whet your appetite, here's a sneak peek at Margaret Atwood's story "Headlife."

The book will be available from the usual suspects like Barnes & Noble and Amazon. And your local independent bookseller.But why not go order Shadow Show now?