There's Just Something About a Cemetery... 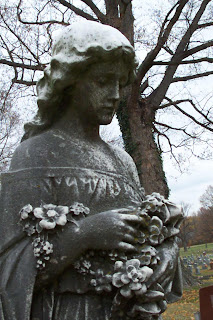 My mother was a rebel. She defied her Irish family, running off to marry not only a non-fellow clan member, but a Protestant of German-English linage. From that time on, her family kept her at a distance. But there were no conflicts for Christmas or Easter festivities. No summer family reunions. Visits from any of her siblings were sparse and often happened when my brother and sister and I were in school and my Father at work. She did maintain a somewhat close contact with two of her sisters, but they had violated the family "traditions" as well.

It wasn't until I was older that I attended any funerals of her family, but on our journey to Cincinnati (where it seems most of her family is buried), she finally opened up about how when she was growing her family visited this very cemetery several times during the summer, not only to lay flowers on the graves, but to spend the entire day, picnicking, praying, and singing songs. While the older ones walked among the gravestones, reliving cherished times their loved ones, the children would frolic about and play games. Special attention would be paid to cleaning and maintaining the markers and areas around them, but mostly it was a time for the dead to be with the living again.

My own attraction to cemeteries came most probably because we wound up living so near to several. Then later, they seemed such quiet reflective spots. Finally, I began dragging my camera along because there were such amazing pieces of sculpture marking so many of the graves.

And yet as I clicked away, I became oddly driven to create motion in the very stone where there most definitely was none. 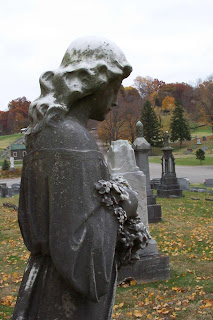 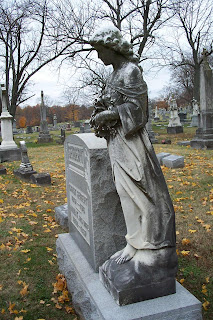 Playing God, was I? In creating motion was I giving life? Breathing into the stone. 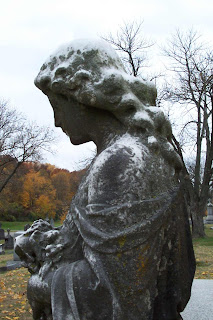 As a writer, that's precisely what is required. I toss out characters onto the mat and puff into them my own experiences/dreams/passions/imagination/senses/and... learning which comes from what I have gleaned from the writers I have allowed to teach me. A clever twist of phrase. The precise word. An unexpected jolt.